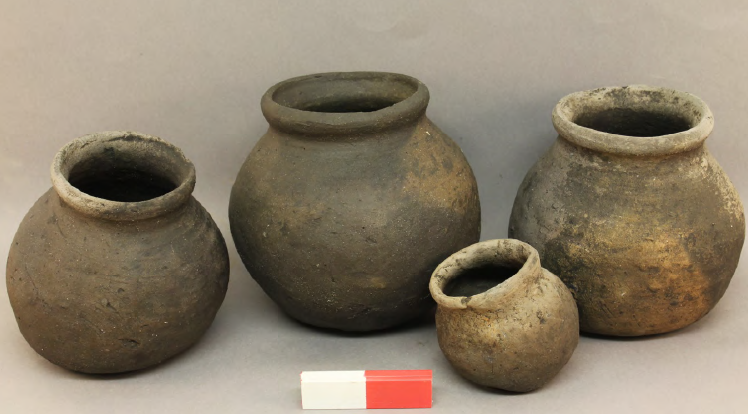 The 10 house development, underway as at January 2017, undertook an Archaeological Survey at the site prior to commencement of work. The scoping document, Archaeological Written Scheme, is from the SNC website and was posted as part of the developer’s planning application documentation. This document summarises the report (Archaeology South East 2015) of an earlier dig on site and in paragraph 1.3.5 states:

“Dating material was found in a majority of the features and indicates a late Anglo-Saxon and early medieval date for most of the activity on the site. There is no pottery that dates to after the 14th century and only one context that can with any certainty be said to be of 13th – 14th century date. Reliably stratified earlier material was only found in one feature, a pit that can be securely dated to the Iron Age. Undiagnostic, but most likely pre-Middle Bronze Age, struck flints were found within later contexts and are therefore residual but do indicate use of the area in prehistory.”

A number of residents contacted the Parish Council about the results of that work. Pre-Construct Archaeology did the survey and their report is published on the relevant planning application page on South Norfolk Council. They have agreed to our publishing the report in these pages but ask that “Pre-Construct Archaeology” is cited when re-producing any sections or images from the report.

ABSTRACT (from the report)

This report describes the results of archaeological excavation carried out by Pre-Construct Archaeology on land north of Church Road, Wreningham, Norfolk, NR16 1BA (centred on NGR TM 16083 98828) between 8th February and 18th March 2016.

The archaeological work was commissioned by Lanpro Services on behalf of FW Properties, in response to a planning condition attached to the construction of 10 new homes with associated access roads, services and landscaping. The aim of the work was to preserve by record any archaeological remains which would be damaged or destroyed by the new development.

The excavation identified several phases of rural settlement and agriculture. The earliest of these was a trackway running east to west across the central part of the site. Finds dated the track way to the Late Saxon period; though it is likely the track way existed much earlier. The second phase of site was a Late Saxon settlement, with associated plot boundary ditches, posthole building, pits and a pottery kiln which
contained six complete pots of a type previously identified elsewhere, and which have been referred to as ‘Wreningham Ware’ in the report. During the early medieval period the settlement shifted west and became more regular. Associated features of the settlement included; plot boundary ditches, a posthole structure, two disused oven pits, a series of fenced plots and a cluster of pits dating to the medieval period.

The settlement was abandoned by the late 14th century, when three large boundaries are established on the site. The site adds to a growing body of evidence for development of rural Saxon and Medieval settlement, but more importantly the discovery of the pottery kiln on site potentially indicates a presence of Late Saxon rural pottery manufacture in the area.