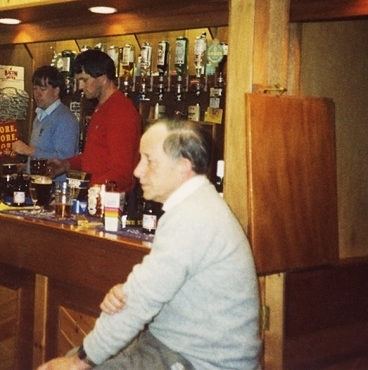 Who was Donald Whiterod (always Donald and never “Don” or “Donny”)?

Many people in the village will know him as the elderly gent who drove very slowly, in a large car through the village, loved dogs and for most of his time at High Common Farm he had at least one dog for company – often an Alsatian – and his favourite tipple was a good whisky. Those who regularly supported Wreningham Social Club would have known that nobody sat on “Donald’s” stool, and the bar staff knew better than to put his drink in anything other than “Donald’s glass”.

However, there was much more to Donald Whiterod than this.

His family took on High Common farm in 1969. Once the farmhouse had been renovated, they moved in, and there Donald lived for the rest of his life. He soon became active within the village. He served on the Parish Council for many years. He is one of the few Parish Council members in living memory who was elected into office, as he was pleased to inform people, especially his fellow councillors.

He served on the Village Hall Management Committee and at one time helped to run the junior discos. He was a member of Ashwren Players and opened his home for rehearsals. He helped in the fundraising for the playing field and the building of the present village hall. In fact, he was elected the first chairman of Wreningham Social Club. Although he did not hold this position for long, he continued to be an active member.

He supported the local church, not least by providing the hoggin for the entrance to the car park. He was a gate steward for the “Wreningham Trotting” which took place at The Poplars grass raceway. He served on the Millennium committee and it was he who suggested that the memorial to the year 2000 should be a village clock which eventually was installed on the tower of All Saints church.

Donald’s charitable activities included raising funds for East Anglia’s Children’s Hospice (EACH). In 2006, he and his brother, Maurice, invited traditional farming enthusiasts to harvest a wheat crop that was threshed with a Fowler steam engine. This raised over £1200 for EACH. There were several of these events over the years – the image below was taken in 2009 and is believed to be a Fowler thresher at the farm as mentioned above.