FOR KING AND COUNTRY

John Henry Ireland – G/70053, Private 7th Battalion The Queens (Royal West Surrey) Regiment. Born 21 April 1900 in Ketteringham, Norfolk. Wounded at Albert (Somme) on 2 August 1918 and died of those wounds on 26 November 1918 in Newport, Wales. The son of William and Sarah Ireland of Wreningham. Buried in the churchyard of All Saints Church, Wreningham (location G70). [Brother of Robert below.]

Robert Ireland – 24140, Private 7th Battalion Norfolk Regiment. Born 10 April 1889 in Burton Le Coggles, Lincolnshire. In 1911 he was recorded as a farm labourer living in Wreningham. He died on 12 October 1916 in Flanders. The son of William and Sarah Ireland of Wreningham. Commemorated on Pier and Face 1C and D, Thiepval Memorial, France. No known grave. [Brother of John above.]

William George Land – 23350, Private 8th Battalion Norfolk Regiment. Born 1896 in Ashwellthorpe, Norfolk and baptised 25 October 1899. Recorded in 1911 as living in Wreningham and working as a farm labourer. Died on 1 July 1916. The son of William and Ruth Land. Commemorated on Pier and Face 1C and 1D, Thiepval Memorial, France.

Frank Browne Lane – 201502, Lance Corporal 91st Res. Training Battalion, Kings Own Yorkshire Light Infantry. Born 1887 and baptised on 6 March 1887 in Wreningham, Norfolk. The son of Samuel and Hannah Lane. In 1911 he was a railway porter in Chesterfield, Derbyshire. He died on 25 March 1918 in UK. Buried at All Saints Church, Wreningham.

Thomas Preston – CH/20048, Private Royal Marine Light Infantry, H.M.S. Chester. Born on 13 June 1898 and baptised on 25 November 1899 in Wreningham, Norfolk. Died 31 June 1916 at the Battle of Jutland aged 18 years. Son of Charles and Sarah Preston, Wreningham, Norfolk. Commemorated on Chatham Naval War Memorial and on the HMS Chester Roll of Honour for Officers and Men killed or who died of their wounds at Jutland on 31st May – 1st June 1916 located in Chester Cathedral.

The circumstances of Private Preston’s death are:

On 31st May 1916, the light cruiser HMS Chester was on station, screening ahead of the fleet, in the misty North Sea. Distant gunfire was heard by her lookouts, and her Captain knowing that they were due to meet with Admiral Beatty’s Battle Group, ordered the ship to full speed to investigate. Eye witness accounts indicate this was rather more like a cavalry engagement, than the formal way of combat that was the way of things past naval engagements.

As HMS Chester steamed out of the mist at 29 knots, just ahead were four German Cruisers. Chester began heeling immediately to port so that her broadside armament could bear, and opened fire. HMS Chester fought gallantly but was no match for the combined firepower of four enemy cruisers, and subsequently took severe punishment. In all, she was hit seventeen times by major calibre shells. The ship was reduced to a shambles, only one gun being operational. Men were laid dying and horribly mutilated by shrapnel. HMS Chester was incapable of further action and was ordered post haste to the Humber and the port of Immingham. As she steamed into the river, tugs were waiting to remove the wounded. The wounded were rushed to Grimsby General Hospital one of whom was a Jack Cornell a 16 year old seaman who had stood by his gun during the battle when all his gun crew had been killed. Although mortally wounded he stayed in position his action leading to the award of a Victoria Cross. 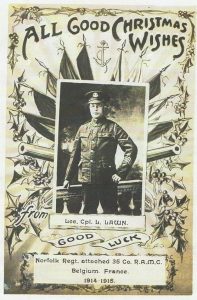 Leonard Lawn – Royal Medical Corps. Prisoner of War for 3 years, gassed, died of his wounds. Born 1 November 1883 and baptised on 24 August 1884 in Wreningham. In 1911 he was recorded as being a farm labourer. Buried on 17 November 1928 in Wreningham All saints Churchyard (location B37). Son of George and Elizabeth Rebecca Lawn of Wreningham.

Robert George Rayner – 19555, Lance Corporal 9th Battalion Norfolk Regiment. Born 1893 in Letheringsett, Norfolk. In 1911 he was working as a farm labourer in Hethel. In 1916 he had a couple of spells in hospital in France with influenza and the affects of gas. He was promoted to Lance-Corporal in February 1918. He died on 8 August 1918 in Flanders and is buried Nine Elms British Cemetery, Belgium. Son of John and Eliza Rayner, Potash Lane, Hethel. 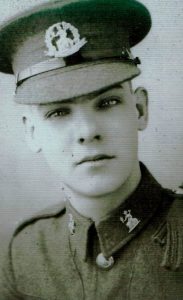 William Ireland – Warrant Officer III Class 2nd Battalion Royal Norfolk, Regiment. Aged 24 years shot by German 2nd SS Totenkopf (Death’s Head) Regiment together with 96 other Officers and Men of the Norfolk Regiment after they had surrendered on 27 May 1940. This is now referred to as the La Paradis Massacre. Buried in La Paradis War Cemetery, Lestrem, France. Grave 2 C5.

Others with an association with Wreningham and who are commemorated elsewhere

Alfred Gooch – 24312 Private, 1/5th Battalion Norfolk Regiment. Baptised 3 February 1889 in Hethel and enlisted in Wreningham. He died on 19. April 1917 in Palestine whilst fighting Turkish forces in the 2nd Battle of Gaza. Recorded on the Jerusalem Memorial Panel 11-15. Commemorated in Hethel Church. Son of Robert & Sarah Ann Gooch, Wreningham. [Brother of Frederick below.]

Frederick William Gooch – 790547 47th Battalion Light Infantry Canadian Forces. Born on 16 April 1883 and baptised on 4 January 1885 in Wreningham. On 3 June 1909 he sailed for Montreal, Canada from Liverpool onboard the “Tunisian”. He returned home and emigrated again in 1913 with brother Percy from Liverpool aboard SS Lake Manitoba. He subsequently enlisted at New Westminster on 1 February 1916 with the 104th Regiment Westminster Fusiliers of Canada which became part of 47th Battalion Canadian Expeditionary Force (1916). He died in France 19 October 1918 aged 35. Son of Robert & Sarah Ann Gooch, Wreningham. Commemorated in Hethel Church. [Brother of Alfred above.]

Robert Hugh Fulcher – 3527 Private Coldstream Guards. Born 1877 in Scoulton. Baptised on 04 October 1891 in Wreningham, the son of Charles and Sarah from Hethel. Enlisted in Sheffield and died Ypres 29 October 1914. Commemorated in Hethel Church.