Friday 18 May 2018
Resident Report (Paolo Dalmazzo)
A towed caravan heading towards Norwich detached from its tow just near Wreningham House and careered unguided towards Top Row junction where it collided with the road traffic signs. No-one was injured and the Police were called, but at the time of writing had not been reported as attending.

Wednesday 15 July 2015 – 2315 (?)
Resident report (D Brake / AN Other)
A motorcycle was travelling towards New Buckenham when its rider lost control on the corner and both machine and rider came to a rest in Top Row. It is thought excessive speed was the cause. No emergency services attended.

Tuesday 26 May 2015 – early morning (?)
Resident report (D Brake)
Signs of a vehicle collision and subsequent damage with the traffic signs on the corner of Top Row and B1113. No further details yet. 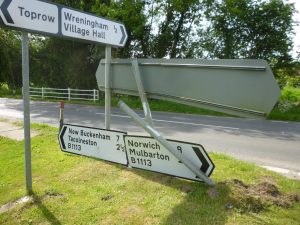 Friday 22 August 2014
Resident report (D Brake & M Hill)
Around 7 p.m. Police closed Norwich Road at Mill Lane and Church Lane diverting traffic through the village. This was to aid recovery of a crashed vehicle some 30 metres North of the Mill Lane / B1113 junction. It is believed that a vehicle travelling towards Norwich approached the junction and as it navigated the bend after the junction it crossed over the road, mounted the earth bank for about 15 metres and then rolled back down onto the road.
The police attending the scene believed the driver had lost control although the reason for this was not known. 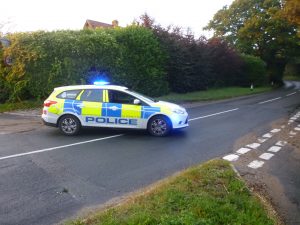 Wednesday 21 May 2014 – 0830
Reported by a resident.
Two vehicles involved in a minor accident resulting in minor damage. The emergency services did not attend. It is believed both vehicles were travelling towards New Buckenham.

A multiple vehicle accident occurred on the B1113 just beyond Rose Cottage at the Parish boundary. This blocked the road for several hours and all three emergency services attended. A young driver was injured and had to be cut out of his car.

It has been reported that one of the vehicles involved car was being driven well in excess of the 50mph speed limit and lost control when overtaking a car, hit the bank, overturned and skidded down the road on its roof. An Ashwellthorpe resident had to take avoiding action to prevent a “head on” collision.

10 May 2014 – approx 0800
Resident report (Michael Hill)
A van driver approaching the junction from Norwich. Travelling at about 45 mph, he braked upon spotting a vehicle immediately ahead about to turn into Mill Lane. The van went up onto the verge just beyond the 50 mph sign, turned over, crossed the road and came to a rest upon its side in Mill Lane. No-one hurt. No other vehicle directly involved. Weather – overcast with occasional showers; Road – Wet/Damp; Vehicle & Driver – Van male; Casualty – none; Manoeuvre – Going ahead right bend; Causes – Loss of control. 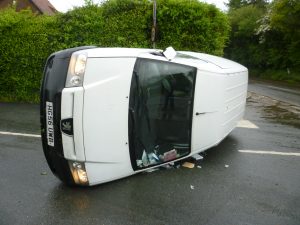 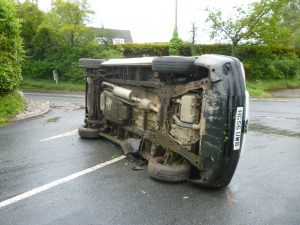 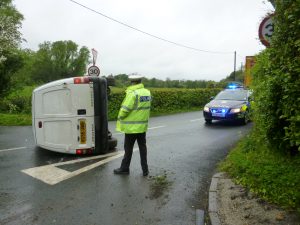 5 February 2014 – 1611
Reported by Resident (Mr Brake)
The car travelling towards New Buckenham lost control on B1113 and swerved into Top Row, demolishing the telephone kiosk, BT cabinet, fencing and halting in the duck enclosure. The police in attendance. 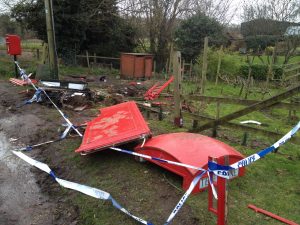 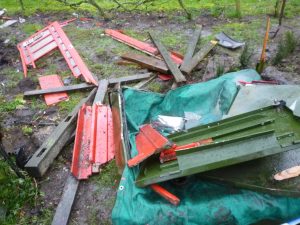 1 December 2013
Personally observed + photographs
Car (Blue, KU07…) in ditch police tape around it. Destroyed the railings protecting culvert on West side of B1113. 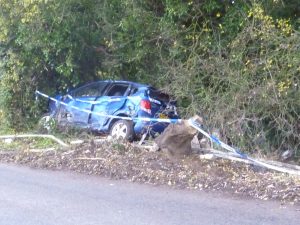 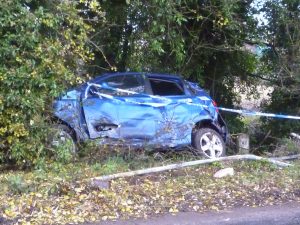 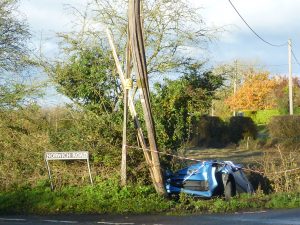 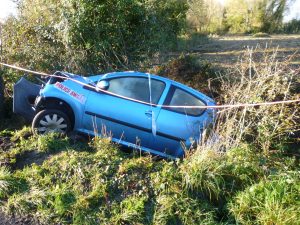 9 March 2013
http://www.edp24.co.uk/
A woman was involved in an accident this evening when the car she was driving came off the road and into a ditch. The incident, on the B1113 at Wreningham, happened at 5.15pm. Emergency services attended the scene but the woman was unhurt. Police were unable to say if the crash was weather-related.

5 February 2012
Reported by resident.
No details as yet but a photo of a car on its roof at the junction has been made available. Photos

Friday 30 December 2011- 2030
http://www.edp24.co.uk
A woman in her 20s taken to hospital with a leg injury following a crash. The accident happened  at 8.30pm on Norwich Road,Wreningham. An ambulance and rapid response vehicle arrived to find the car on its side. She was taken to the Norfolk and Norwich University Hospital. Fire crews also assisted.
Police Record
Time – 2035 ; Weather – Raining without high winds; Road – Wet/Damp; Vehicle & Driver – Car Female 21 ; Casualty – driver female 21; Manoeuvre – Going ahead left bend; Causes – Loss of control / Distraction in vehicle

6 August 2011
The Parish Council contacted NCC Highways to request repairs be made to street signage on B1113/Top Row junction. These had been damaged in a vehicle collision and was thought to represent a hazard to traffic and pedestrians. Photos

Wednesday 4 May 2011 – 0810
http://www.eveningnews24.co.uk/
Two vehicle collision at 8.10am on theB1113. According to a police spokesman the road was cleared by 11am. Blocked both sides of the road but one lane was opened at 9.30am. Fire crews from Wymondham, Earlham and Norwich attended and released one casualty. Two people were taken to the Norfolk and Norwich University Hospital, but the extent of their injuries is unknown.

February 1986
Reported by residents (recollection + images)
Two fatalities – Mr Richard Bolt and friend – vehicle left the road and crashed on East side of B1113 near Top Row into the culvert.