On Saturday, very early (for me), Motion Bear Media started filming scenes for a video commissioned by Norfolk Constabulary. They had obtained prior permission to use the field and I was pleased to offer them access to the facilities within the hall. Just as well since it was a cold and damp day; hot drinks were a must. 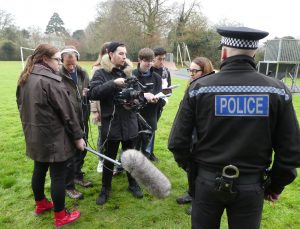 Motion Bear Media is a business venture staffed by students from City College Norwich. They apply their learning and skills for real on live contracts. In this case they are producing a video for the training of police personnel on the subject of vulnerable people – Saturday’s scenes related to a child alone in a park. 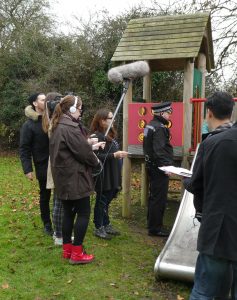 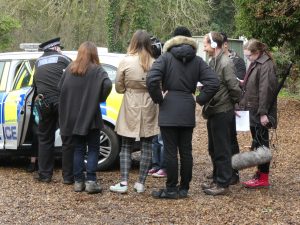 The police officer (a real one!) observed a young girl (not an actor) apparently alone and unsupervised in a park, considered that there might be an issue and approached her. On gaining her confidence, he took her to the police car in order to take her back home. A simple scenario but one needing tact and care. 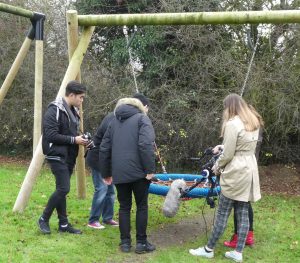 Much effort was put into making the visuals right, as you might expect, but to see the sound crew gathered around the play equipment to capture the essence of the squeaky chain, and, so many times an empty plastic bottle was recorded dropping onto the ground and bouncing about.

The girl’s parents were on hand to reassure their daughter; her brother and sister kept her feet firmly on the ground! Filming requires much standing around, repeating actions, repeating lines and scrutiny of sound and video. The supervising lecturers made sure the crew were fully focused on progressing the shooting schedule. Even so they did not finish until 11am!

Since it is a police training video it is unlikely that we’ll get to see the finished result. But, it was interesting to watch it being made and to see the two characters played with effortless ease even with the crew gathered closely around them.