Many of us will have encountered slip-road closures when trying to access the A11.

Highways England has posted an explanation about what is planned to happen from now until June 2023. The best page to examine for sliproad closures is page 7 of this document here. The main diagram is presented below.

In October 2021, the Wreningham Heritage Group held an exhibition in the village hall covering aspects of our village story over a period from the early 1800s to recent times. Many villagers asked if it would be possible to see some of this again. On Saturday (7th May) you can.

The occasion is the visit of the “Food Museum” (formerly known as the Museum of East Anglian Life) who are holding their own exhibition in Wreningham village hall; the Wreningham Heritage Group will be supporting them by reusing some of display material from last October. This will include old village farm information and old photos together with some very exciting and recently discovered information – from over 100 years ago, about the former village shop located at the school crossroads.

The event is free. The hall is open from 10am to 4pm. All will be very welcome and refreshments will be on sale.

East Anglia GREEN is a proposal to build a new high voltage network reinforcement between Norwich, Bramford and Tilbury. While our existing high voltage electricity network in East Anglia has been sufficient until today, it doesn’t have the capability needed to reliably and securely transport all the energy that will be connected by 2030 while working to the required standards.

The network reinforcement that East Anglia GREEN will provide would be achieved by the construction and operation of a new 400 kV electricity transmission line over a distance of approximately 180 km and a new 400 kV connection substation.

The reinforcement would comprise mostly overhead line (including pylons and conductors – the ‘line’ part), underground cabling through the Dedham Vale Area of Outstanding Natural Beauty (AONB), works at existing substations at Norwich, Bramford and Tilbury and a new 400 kV connection substation in the Tendring district.

East Anglia GREEN will play a vital role in delivering electricity efficiently, reliably, and safely and will support the UK’s move to reduce carbon emissions.

To support the consultation, we are holding a series of in-person events and online webinars.

Visit one of our face to face public information events being held at the following locations across the proposed route to find out more and speak to experts within the team.

Attend an hour online webinar where we will present details of the proposals followed by an open Q&A. The briefings are either for the entire route or split by local authority. Visit our website to register.

All information on the proposals, including an interactive map, all consultation materials and how to provide your feedback are available on our website.  Please visit nationalgrid.com/east-anglia-green.

If you have any questions, please do not hesitate to contact the East Anglia GREEN Community Relations Team on +44 (0) 800 151 0992 and/or EastAngliaGREEN@nationalgrid.com

National Grid is planning a significant upgrade to the electricity power supply for the East Anglia Region. As you can see from the image in this post, the potential path for the pylons passes to the East of Top Row and as such we think that you should be aware of their proposals.

A consultation period is now open from 21 April to 16 June 2022 (their comment form is available here). There will be a public session in Mulbarton on 11 May from 1pm to 6.30 pm in the Village Hall. See the newsletter about the consultation process and other venues here.

A high-level document addressing the whole project is available here (58Mb) for download. An extract from this document covering our area can be found here (6Mb).

For more information about their plans for South Norfolk, you may wish to look at their website.

Please return comments to South Norfolk by 14 May 2022.

Due to the popularity of the online information session held on Monday, SNC is repeating their Zoom session for those considering hosting a Ukrainian refugee or family in Norfolk – this is scheduled for Thursday evening (31 March) – 7 pm on Zoom.

It is for anyone in Norfolk as the content is not district specific as the processes are universal across the county.

Alternatively, you can view the Monday night session here: https://youtu.be/bFSWJiQof5M

Nominations are now open for South Norfolk Council’s Community Awards, celebrating the work and achievements of volunteers, community groups, and businesses across the district.

The categories for this year are:

The winners in each category will receive £250 for their chosen community group.

If you know someone who is doing a great job, then please nominate them. The closing date is 6 June 2022. For more information and to nominate someone please visit https://www.southnorfolkandbroadland.gov.uk/communities/community-awards-2022

If you need any further assistance or have any queries, contact the Communities Team on 01508 533914 or email communities@southnorfolkandbroadland.gov.uk

The sponsorship link is here

More about the Priscilla Bacon Hospice project is here.

Test-pit digging in our community archaeology project returns this Summer. The last set of diggings’ findings are discussed in the Wreningham interim report.

The three sites selected for the second round of test-pitting are:

Please register your interest with Steve Hickling (details below) who is co-ordinating the project and the experts who review the findings. There will be a mid-morning start at 10am. Volunteers should bring a shovel / spade / mattock or pickaxe and a trowel or sieve if you have them. Some suggest that bringing a flask of coffee and some lunch also help with motivation!

The contact for interest and question is Steve Hickling, currently working from home, but reachable at:

The Wreningham Community Archaeology Project got off to a promising start over the weekend of August 11-12 with a total of five test-pits dug in gardens around the village, reports archaeologist Steve Hickling, who is leading the project.

A sunny weekend saw pits being dug in people’s gardens on Wymondham Road, Ashwellthorpe Road, Mill Lane and the B1113 and all the test-pits yielded some interesting results:

Victorian pottery and little bits of tile were unsurprisingly found in all the test-pits and almost all also yielded prehistoric burnt flints (pot-boilers). These are flint pebbles heated in a fire and then thrown into a liquid in order to heat-up that liquid.

In prehistoric times pottery was terrible and would not survive being put on a fire to heat the contents so pot-boilers were used instead. It is thought that they were heating liquid as part of the process of dying cloth or perhaps making beer. A great number were found in Graham’s test-pit on Mill Lane.

Two of the pits yielded medieval pottery. One on Ashwellthorpe Road produced a couple of sherds, and one on Wymondham Road, behind Pear Tree Farmhouse, produced some rather large sherds. This suggests that there is medieval occupation here.

Pear Tree Farm is a lovely c.17th century timber-framed farmhouse. The test pit produced a lot of c.17th century pottery, a posthole and a layer of redeposited yellow clay, which may be spoil from a deep hole dug nearby, or the remains of a demolished clay-lump building. The medieval pottery suggests that the present house may be a rebuilding of a medieval farm.

All the artefacts recovered will be cleaned and passed to an expert for dating and describing.

The next step is to excavate a couple more test-pits on Saturday 1st of September. It would be nice if we could have people to help with the two test-pits on the 1st September. Both are in the middle of the village. If anyone else wants to take part, please let me know on 01508481718 or email me on steve.hickling@norfolk.gov.uk. 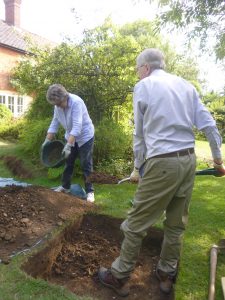 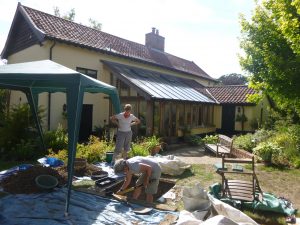 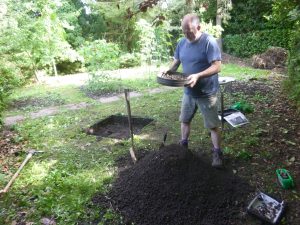